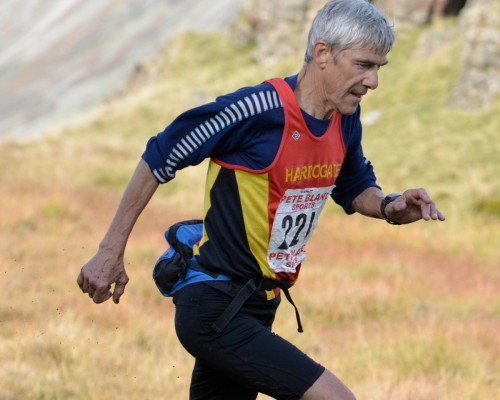 Harrogate Harriers has seen a strong resurgence in off-road running in recent years, with more and more members taking to the hills and fells that surround us. Harrogate is ideally placed for this kind of activity, with the Yorkshire Dales literally on our doorstep and the fells of Cumbria less than two hours away.

You will often find our members out on the hills of Nidderdale and the surrounding moors of Baildon, Rombalds and Ilkley (baht ‘at of course!) and we make regular trips to the Yorkshire Dales and the Lake District.

Our members participate in a wide range of fell-orientated events, from ultra-long endurance races such as the Fellsman, Lakeland 100 and Ultra Trail du Mont Blanc to the plethora of local fell races that are found all over Yorkshire.  The club also competes in National-level relay events and in recent years have achieved great results at the Calderdale Way Relays and UKA Fell Relays, our teams finishing ahead of many established fell-running clubs. We also have a small number of clinically insane members who have either completed or are training towards an attempt on the Bob Graham Round, the notorious 42-peak circuit of the Lakeland Fells that must be completed within 24 hours.

We are extremely lucky to have Ben Grant as our mentor, for those who don’t know Ben his achievement list is long and distinguished:  He has been the FRA English and British Champion on mulitple occasions, he also won the World MV55 Mountain Running Championship at Sauze d’ Oulx in Italy in 2004 AND the World MV65 Championship at Betws-y-Coed in 2015, so it’s fair to say we have a very good resource in the club for advice!  Our coach Ian Rowbotham is also an accomplished and highly-regarded fell-runner, with many race victories under his belt.  We have other members (some with a few screws loose) who have amassed years of fell-running experience, to say nothing of huge success.